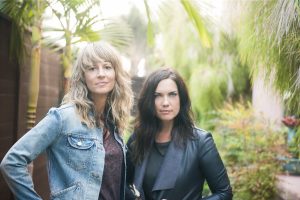 Madison Violet has been deemed one of the best female duos to come out of Canada. The singer-songwriter team of Lisa MacIsaac and Brenley MacEachern continue to woo audiences and critics alike with their engaging performances and brilliant musicianship. With 10 studio albums under their belt and a bounty of awards and nominations (including a Juno nomination and a Canadian Folk Music Award for Best Vocal Group Album of the Year), the pair moves effortlessly from folk to pop to electronic to Americana. They play to sell-out audiences in the United Kingdom.

Armed with nothing more than acoustic guitars, fiddle and mandolin Brenley MacEachern and Lisa MacIsaac let their voices soar and turned in a spellbinding performance. — John Anson, Lancashire Telegraph

Toronto-based Madison Violet released their latest album in March, “Everything’s Shifting.” It is an album to be listened to on the open road, with the windows rolled down: a love letter to their fans, from two wanderers who continue to follow the melodies wherever they lead. 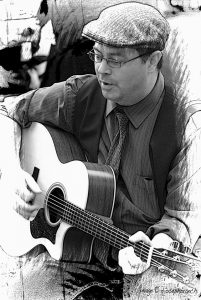 Charlie Mosbrook is an award-winning songwriter, performer, and advocate for American folk music. Beginning his career in 1988 as a street musician, he quickly became a popular open mic host throughout Northeast Ohio. As a folk music advocate Charlie continues to organize local open mics. His recordings of original and traditional songs have earned him rotation on many popular folk radio programs around the world.

There’s a familiar comfortable feeling that comes over you when you listen to the music of Charlie Mosbrook. The guy has a rich, worldly voice that sounds like it was broken in slowly, like a well-loved instrument. –CD Review

Charlie’s song “Remember Who We Are” earned him 2nd place in the 2018 Woody Guthrie Folk Festival Songwriting contest in Okemah, Oklahoma. The honor included an invitation to perform on the mainstage during the festival.

A two-time Ironman triathlete and 12-time marathon finisher, Charlie suffered an incomplete spinal cord injury in 2010 and sometimes must perform in a wheelchair. He draws on his experience in endurance sports to continue moving forward as a performer, touring annually and independently by train, bus, or air. He performs monthly for patients at Cleveland’s Metrohealth spinal cord injury rehabilitation unit.

Audio: Up Among the Stars, by Charlie Mosbrook 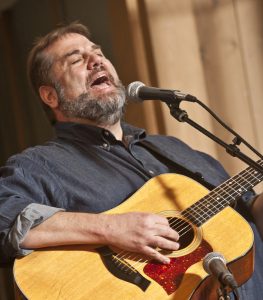 This is what folk should be.
–Detroit Free Press

Matt brings a unique set of talents to the stage as an educator, performer and master of ceremonies. His passion for bringing community together through music and education is infectious. Add to that Matt’s own special brand of humor and you are in for a most entertaining and enlightening experience.

Folk Alliance International inducted Matt into the  International Folk D.J. Hall Of Fame at its conference in Montreal in February. Matt has hosted and produced thousands of radio shows since 1986. Now you can hear “Folk With Matt Watroba” on Michigan State Public Media, WKAR in East Lansing, Michigan from 6 p.m. to 8 p.m. on Sundays. You can stream it at wkar.org.

Video: They Used to Play Baseball Here, by Matt Watroba